Runway moments are the keystone of a designer’s success, and just as Gabrielle Chanel and Karl Lagerfeld broke boundaries in the iconic fashion house, Virginie Viard, the newest creative director for the house of Chanel, is following suit to creative re-imagined, timeless visions in the world of fashion.

Imagine the traits a designer must possess to take on the task of designing fashion worthy of the famed Chanel label. Creativity, yes. Determination, ditto. And relevance, certainly, as Chanel’s previous artistic director, Karl Lagerfeld, proved.

But Lagerfeld is gone, having died in February 2019, and the void is being filled by a force of nature named Virginie Viard, the first woman to hold the title of artistic director since the inimitable Jeanne Gabrielle (Coco) Chanel herself. Viard worked alongside Lagerfeld since 1987, and he often referred to her as “my right arm… and my left arm.”

Viard introduced her first collection for Chanel in spring of 2019 with a fashion show inside the Gare de Lyon train station, and her distinctive take on cruise wear debuted in 2020. 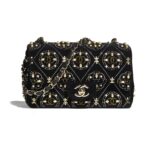 Similarities between the advent of Coco Chanel’s career and Virginie Viard’s can be made: Coco grew up surrounded by nuns, began by designing women’s hats, and segued into the use of sensual jersey knits for dresses and skirts. Virginie was raised by physician parents, learned how to sew from her mother, with inspiration from grandparents who were silk manufacturers. Virginie produced an early clothing line using jersey knits under the name, Nirvana.

Coco worked tirelessly to reach the pinnacle of the fashion world in her time, just as Virginie’s rise did not occur overnight. Coco was well known for her peculiarities and perfectionism, and it has been said by at least one Chanel brand ambassador that Virginie, too, has her own idiosyncrasies.

Since assuming the mantle of artistic director, Virginie has agreed to very few media interviews; she is clearly consumed with this opportunity to showcase her vision for Chanel, post-Lagerfeld, and is generally in a whirlwind of design meetings, showings, and studio work.

But last year, the Chanel team chose director Sofia Coppola to work on the sets of the Chanel 2019/20 Métiers d’art show and direct a behind-the-scenes video illustrating the new direction the House of Chanel was taking. The result was a fascinating behind-the-scenes conversation with a surprisingly approachable Virginie Viard as she prepared to launch her fashion collection in a show at the Grand Palais.

The making of Virginie Viard

Born in 1962, Virginie grew up in a successful family. Her mother and father were doctors, and her grandparents were involved in the production of silk. Following studies in theatre design, she served as a costume designer assistant to Dominique Borg. Together, the two women created costumes for Camille Claudel, a musical based on the real-life artist best known as Auguste Rodin’s tortured muse and lover.

In 1987, Virginie joined the House of Chanel as haute couture embroidery intern. Five years later, Karl Lagerfeld recruited her to work with him at Chloé. There, she worked with French actress Isabelle Yasmina Adjani to create costumes for a few mid-90s films that included Three Colors: Blue and Three Colors: White. A few years later, Virginie returned to Chanel, and in the year 2000, she’d found her place in its ready-to-wear division.

Viard describes her style as “flea market hits,” a boho style originally embraced by Lagerfeld at Chloé but taken in a fresh new direction. When asked by Coppola in the YouTube video what she believed her primary task was during Fashion Week, Viard calmly replied: “Sixty girls to dress.”

Chanel’s 2020/21 Métiers d’art show was staged at Château Chenonceau, an over-the-top 16th century castle in the Loire Valley that’s been featured on numerous television specials, is visited by more than a million tourists annually, and is best known as the former home of Catherine de Medici.

Exquisitely styled models strutted through the castle’s hallways in classic Chanel tops with camelias at the lapel, paired with floor length skirts of blue floral batik. And of course, many outfits were capped with the identifiable CC… the most desired bling in any fashionista’s closet.

In 2021, Coco’s spirit lives on with a contemporary twist on some time-honored looks. Signatures like Chanel’s classic combination of black and white, under Viard, are now enlivened by pink leggings. And frocks can sometimes be reminiscent of the nuns who first inspired Coco Chanel. So, just how did Ms. Chanel become an icon? Read on.

The making of Coco

At the turn of the 20th century, when a woman’s place was most decidedly in the home, the ambition of Jeanne Gabrielle Chanel, later known as Coco, swam against society’s current.

She was born in Saumur, France, in 1883, to parents who didn’t marry until after she was born. Even after Jeanne’s sisters came along, her parents traveled the world like a pair of carefree teens, often leaving their young family in the care of virtual strangers. When their mother died, their father shipped the girls off to an orphanage within a convent. It was here that a pre-teen Jeanne took note of a style and coloration (black and white) that would influence her fashion designs forevermore. In fact, that string of pearls that became essential to the signature Chanel ensemble was based on the rosaries that dangled from the nun’s necklines.

It was at the convent that Jeanne was taught how to sew, and in the summertime, she was sent to visit an aunt who tutored her in the popular art of millinery. By the age of 20, Jeanne had begun to develop a distinct sense of fashion style, coupled with Parisian sensuality. That sense continued to be honed to a diamond tip and would serve her well throughout her long and illustrious career.

But how on earth did this convent-raised Catholic girl come by her unusual nickname, Coco? Theories abound, but the one most likely is that Jeanne grew up and embraced her youthful “party years,” living in Moulins in central France and making money singing in a nightclub there; her favorite tune was “Who’s seen Coco in the Trocadero?” A second theory suggests that the name Coco referred to late night partying, often fueled by cocaine. Who to believe? Well, both tales add one more level of mystique to the woman who established the legendary House of Chanel. She’d be pleased to know that the energy and talent of Virginie Viard is being put to use to extend that magic.

From Switzerland with Love