Chateau Montelena and Stag’s Leap Wine Cellars proved in 1976 at The Judgment of Paris that California could produce wines that were every bit as good as those produced in France. The state’s victory in the historic blind tasting propelled Golden State vintners toward ever more excellent bottlings, and inspired the belief that the ’76 wins were not mere anomalies—a certainty held by Jess Jackson, founder of one of the most successful family-owned wine companies in the United States. Jackson had long desired to create his own wine that stood-up to the world’s best. In 1998, in partnership with French vigneron Pierre Seillan, his dream was achieved with the first vintage of Vérité. Starting with and since, the label has earned 17 perfect 100 point scores from Robert Parker Wine Advocate.

Meaning “truth” in French, Vérité wines blend Seillan’s Old World expertise with New World fruit to create three of the most critically acclaimed Bordeaux blends ever produced: the Merlot-based La Muse, the Cabernet Sauvignon-based La Joie, and the Cabernet Franc-based Le Désir. Seillan, a sixth generation vigneron, whose wine career began at his family’s estate in Gascony, France, met Jackson and his wife Barbara Banke in 1997. Intrigued with Seillan’s skill and expertise, Jackson invited him to California to create something entirely unique for the region. Recognizing the potential of the Sonoma County terroir in the foothills of the Mayacamas Mountain Range where the Alexander Valley, Chalk Hill, and Knights Valley appellations merge, and excited about the possibility of crafting his own wines in California, Seillan eagerly accepted.

After more than 20 years at the Vérité helm, and with numerous accolades to his name, Seillan has passed the Vérité winemaking baton to his daughter Hélène who started her wine career in 2003 at the family’s St. Emilion winery Château Lassègue, an environment that provided unparalleled experience and a comprehensive overview of every step in the farming and winemaking process. By 2006, she held the role of the Château Lassègue’s assistant vigneron. She came to Vérité in 2008, bringing with her everything she learned from her time in Saint-Émilion. She is dedicated to continuing what her father started—crafting wines without compromise—and takes utmost care in every step of the viticultural and winemaking process. “I believe it is my duty and responsibility to keep the signature that my father created 20 years ago,” says Hélène.

“My daughter has exceptional talent and totally understands the style of Vérité,” says Pierre. “She is the perfect person to continue Vérité.  She understands the complexity of the blends and we have been repairing vineyards for new stock to ensure not just the protection of the quality but also the style of the wines. Quality without style doesn’t mean anything. It is the style that is the reference of the quality.” 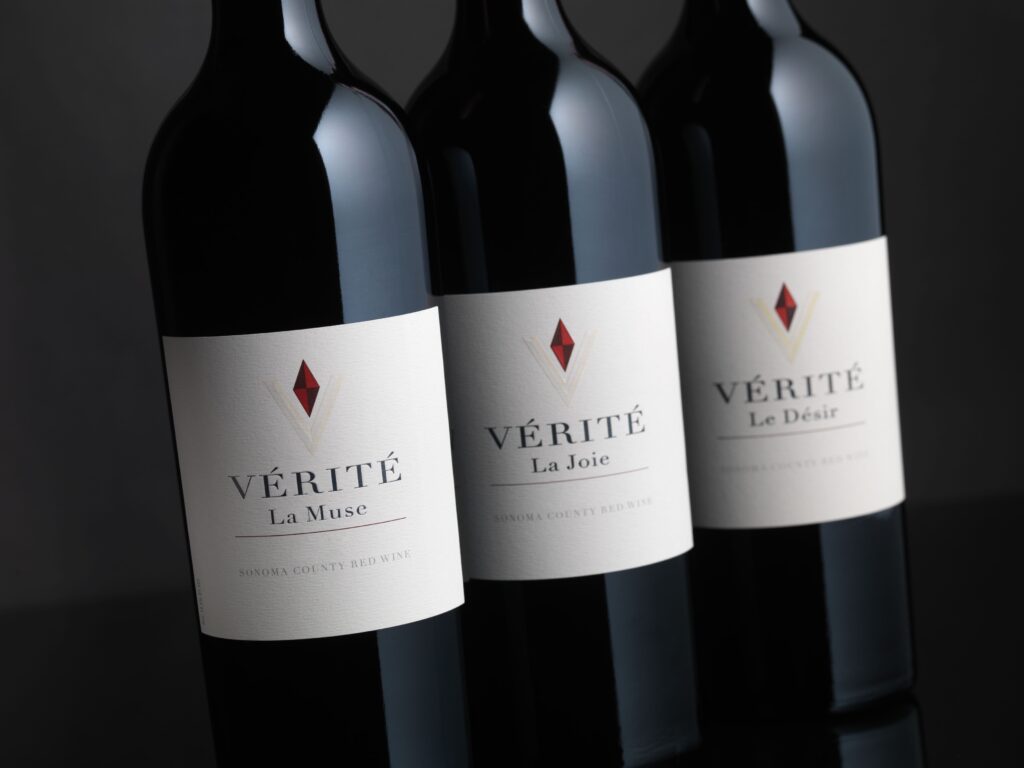 That style, shared amongst the three bottlings, is lush, with depth and texture. For the current 2019 vintage, the Merlot dominant La Muse shows a deep, ruby red color and expressions of opulent fruit aromas, with a palate that mirrors the nose. La Joie, with its predominance of Cabernet Sauvignon, shows a rich core of black-violet concentration with fresh fruit aromatics; the palate illustrates power and suppleness. Cabernet Franc-powered Le Desir features a rich violet hue, exotic aromatics (think brown buttered toast, ground cinnamon, and California bay laurel) and the finely balanced palate is robust. While the varietal proportions may vary slightly year to year, giving every vintage its own personality, collectors have come to trust that no matter the bottling, each is certain to reveal the complexity for which the label has become known, and each is a ‘flex’ within any wine collection.

Vérité’s magic is found within its estate terroir. Each of its vineyards is an intricate patchwork of soils, microclimates, exposures, and elevations. Rather than treat each site as a single entity, Hélène and her father have chosen the absolute best quality micro-parcels; after twenty two years of careful study of their Sonoma terroir, the duo has identified more than 100 of these tiny micro-crus, representing a palette of more than 40 different soil types spanning 2400 ft. in elevation. A wall display of soil-filled vitrines within the winery’s beautiful new French chateaux-style visitor center in Healdsburg provides a stunning illustration of the soil varieties. It is here, amongst elegant furnishings, artworks, and cashmere throws, that guests can enjoy a taste of Vérité.

The Matheson is Healdsburg’s Gathering Spot

Become the Best Version of YOU This Year